Mother Mary Teresa of the Holy Ghost was born in New Ross on 29th July 1769.  Her father and brother were local medical doctors. The Kavanagh home was at Ringwood, The Rower, Co. Kilkenny and their medical practice was located a few miles away at No. 2 John Street, New Ross, Co. Wexford.

In 1775, during the period of the Penal Laws, Dr. George Kavanagh and his son became Protestants in order to save their property.

Dr. Kavanagh’s daughter decided to become a nun and joined the Carmelite Monastery in Ranelagh (Dublin).  In   April 1791, at 22 years of age, Sr. Mary Teresa Kavanagh made her profession as a Carmelite Nun.

In her early religious life she had first-hand experience of the persecution of the Penal Laws ,when in 1804 the members of her community were driven from their convent, deprived of the religious habit, and compelled to rent a house in Arran Quay ( Dublin) where they lived as seculars before being allowed to return to their cloister. Mother Kavanagh was Mother Prioress, when the convent of Ranelagh was built in 1805.

For many years Mother Kavanagh had nurtured hopes to found a monastery in her native town, as reparation for the defection of her father and brother from the Roman Catholic Church. Coincidentally, it was through another family relation that her prayers were answered.

In 1816 her prayers were heard when her sister’s brother in law, Dean Chapman, Parish Priest of New Ross, applied to Ranelagh Carmel for a group who would undertake the running of a school for the education of poor children in his parish. It is most likely that the family connection prompted Dean Kavanagh to make this request to Ranelagh Carmel. The Mother Prioress of Ranelagh agreed, if matters could be arranged, to place a small community of her Sisters at Dean Chapman’s service.

Thus, Mother Kavanagh returned to New Ross as Foundress and First Prioress of Mount Carmel Monastery on 18th July 1817, aged 48 years.  Mother Kavanagh was Prioress for 18 years, and guided the destinies of her foundation with singular tact and prudence through all the early vicissitudes and struggles in trying times.  Irish Catholics still lay crushed under the oppression and restrictions of the Penal laws, as Catholic Emancipation was not granted for more than a decade after the arrival of the Carmelites to New Ross.

The Very Rev. William Chapman, Dean of the Diocese of Ferns, was Parish Priest of New Ross close to forty years.  He was a member of a highly respected family, resident in the Hook, where he, himself is interred in the graveyard of Churchtown.

It seems that Dean Chapman acquired the lease of a small house with garden and a plot of ground in an area known as Bishop’s Land from the local Protestant owners, the Banks family.  He intended the place as a residence for his retirement and had not thought, then at least, of establishing a convent in the town.   He is remembered as a zealous priest who laboured indefatigably for the welfare of his flock, many of whom were living in crushing poverty. He was acutely aware of the need for education among the poorer classes as a means of improving their chances in life.  This inspired him to seek the services of a community of religious who would impart secular and religious instruction to the children of the parish.

Needless to say , many difficulties beset such a project , since as yet, Catholic education was banned by law and threatened by penalties, though somewhat lessened at the time. Still, this idea grew stronger in the Dean’s mind. At length, he determined to face the task and brave the difficulties which he foresaw would arise.  Religious Orders were then very few in Ireland but,  as previously stated ,  one of the Sisters of the Carmelite community in Ranelagh was a connection of his own family and he entered into communications with her, laying before her the project he had at heart. His approach was an answer to Mother Kavanagh’s years of praying to establish a convent in her native town. Thus the project was launched, but the difficulty of procuring a suitable residence for the nuns and accommodation for a school was now to be dealt with. Obstacles presented themselves on all sides. Finally, Dean Chapman offered to give up his own house and the land adjoining and transfer them for the purposes of the foundation.  When it became known that a community of Catholic religious women were about to be established in the town (a nun had never been seen in New Ross since before the Reformation) a storm of bigotry arose. The Parish Priest was freely accused of having obtained a lease of his residence under false pretences and threatened with litigation on the part of the landlord.  Dean Chapman was equal to the occasion and was not cowed by the attitude taken by his critics.

The Foundation of Carmelite Monastery in New Ross

On Friday 18th July 1817, Mother Kavanagh and the founding group accompanied by the Carmelite Provincial, Fr. Leo Oates O.D.C. entered and took possession of the new convent which they named Mount Carmel.  On 20th July 1817, Feast of the Prophet Elijah, the Provincial celebrated the first Mass and the new monastery was blessed and dedicated to Our Lady of Mount Carmel. 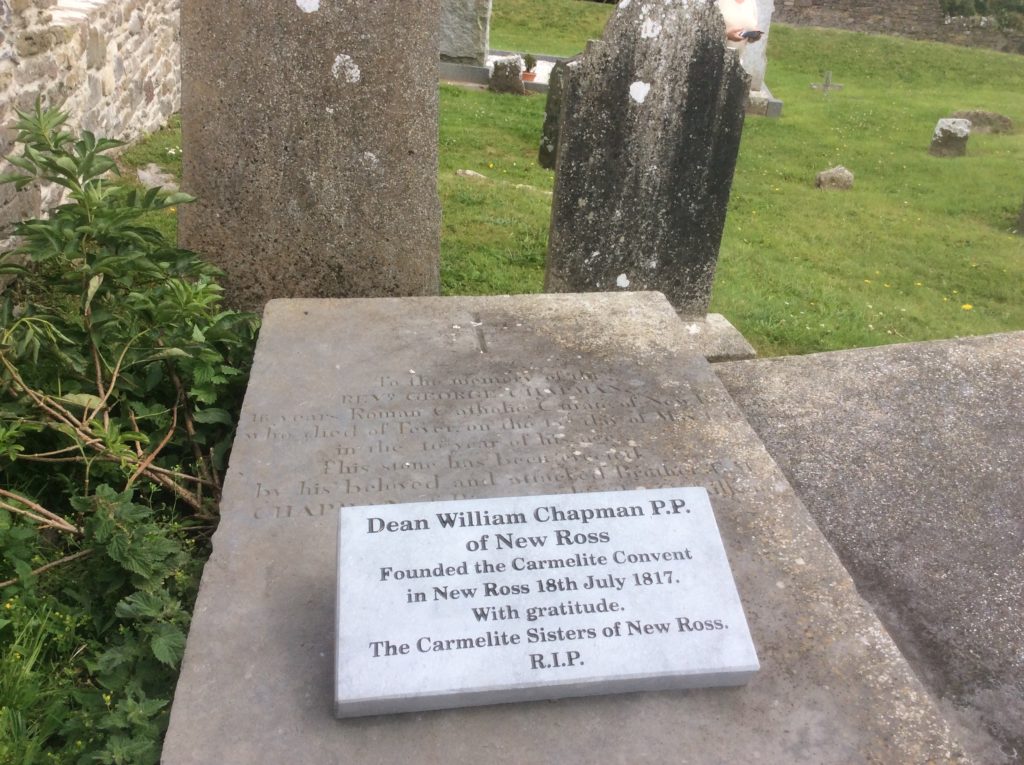