The Infant of Prague 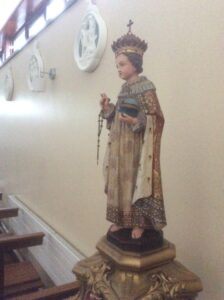 . On the 25th. March 1890 the Arch Confraternity of the Holy Infancy was established and devotion to the Infant of Prague has continued there ever since. Now that three of the Sisters are with us in New Ross Carmel they brought the statue with them. We invite anyone who wishes to be enrolled in the Confraternity to contact Sr. Cora Marie for more information.

St. Teresa of Jesus (Avila) is responsible for devotion to the Divine Infant as we know it today. St. Teresa had an extraordinary devotion to the Divine Infant and always gave a gift of a statue to each new monastery she founded. In her book The Life she recalls an encounter with a Child who asked her who she was, to which sshe immediately replied “I am Teresa of Jesus and who are you my Child?” the answer given was “I am Jesus of Teresa” and then the Child vanished.

Pope Benedict XVI visited the Church of Our Lady of Victories in Prague. This Church which was built by the German Lutherans between 1611 and 1613 was on a site once occupied by a chapel dedicated to the Blessed Trinity. In this Church is the very famous image of the infant Jesus of Prague. This statuette was made of wax over a wooden frame and originally came from a Carmelite convent in Southern Spain, and was given to them by St. Teresa herself. The Carmelites in turn gave it to Princess Polyxene von Lobkowitz in 1628 and it was she who brought it to Prague where it is now venerated. Having crowned the statue the Pope went on to say

The image of the Child Jesus calls to mind the mystery of the Incarnation of the all-powerful God who became Man and who lived for thirty years in the lowly family of Nazareth. In the Holy Infant of Prague we contemplate the beauty of Childhood and the fondness that Jesus Christ has always shown for little ones.